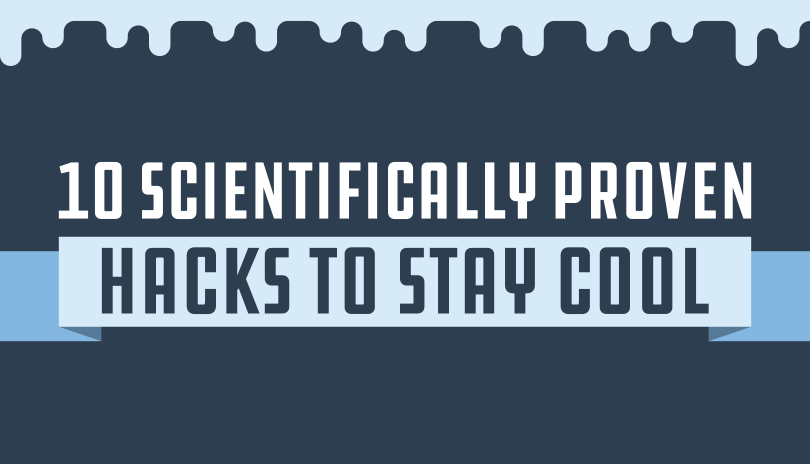 As temperatures rise in summer, your brain and body play out an elaborate battle plan to keep cool. A region of your brain known as the hypothalamus—often called the “body’s thermostat”—detects changes in core body temperature and signals your body’s first responders.

You probably have a negative association between sweat and it’s common predecessor, rigorous physical activity, but sweat is what actually cools your body. The way it works is simple, when your body gets overheated, it begins to sweat. When the sweat evaporates it produces a cooling effect.

Perhaps more frustrating than breaking a sweat during a workout is during your nap on the couch. As your home’s temperature approaches intolerable levels, you can feel irritable and helpless. When the body’s internal temperature exceeds 104°F you run the risk of heat exhaustion, which kills over 600 Americans every year on average.

Despite the intricacies of the body during summer spikes in temperature, the following science-backed hacks will help you keep cool in any heat wave.

Most of the heat generated in the body is derived from eating. If you have ever eaten a large meal and felt sweaty and lethargic afterward, this is because eating increases your core temperature as the body works to digest and metabolize your meal.

Watermelon, peaches, apricots, and radishes naturally cool the body by replenishing electrolytes. Electrolytes are salts and minerals, such as potassium, magnesium and calcium, that conduct electrical impulses in the body. Loss in electrolytes through sweat leads to dehydration.

Other foods such as fennel seeds and fenugreek seeds are known to improve heart health, cooling the body as they lower blood pressure.

Coconut water is high in potassium, which makes it a great source of electrolytes. If proper hydration is not maintained, the amount of blood flowing through your cardiovascular system diminishes causing your heart to work harder, increasing your core body temperature.

In a study that proves coconut water’s ability to fight hypertension, 71 percent of patients experienced a significant decrease in average diastolic blood pressure, the pressure between heartbeats. A lower diastolic pressure means your blood is not applying unnecessary pressure against your artery walls.

The body naturally cools itself through sweating, but the cooling actually results from evaporation. Sweat cannot properly evaporate if covered by thick clothing, so the looser and lighter the clothing, the more conducive to cooling.

Increases in core body temperature have been linked to caffeine intake. Caffeine causes vasoconstriction, the constriction of blood vessels which warms the blood. Vasoconstriction is the opposite of vasodilation, which is a process used to cool the body.

Despite your attempts to cool down with that iced coffee or energy drink, the feeling may be temporary as the warming effect of caffeine commences.

Pressure points in various locations around your body can actually assist in cooling you down. Applying pressure to the back of the neck (GB20) and shoulders (GB21) can lower your blood pressure. Another cooling pressure point is located on the bottom of your feet (KD1), which is why dipping your feet in cool water can result in a full-body cooling sensation.

Acupuncture is a popular alternative medicine with roots in traditional chinese medicine. The 2,500 year old method for healing has been growing in popularity for its ability to reduce pain, depression, hot flashes and inflammation.

Although it may seem counterintuitive to eat spicy foods to cool down, science has proven that it works. Chili peppers contain a chemical compound that tricks the brain into a false sense of increasing body temperature. The cooling component of spicy food is then subsequently engaged as you begin to perspire, which results in cooling through the evaporation of sweat. The same is true when you drink hot liquids.

In a study subjects were fed a chili pepper in the first course of the meal and subsequently consumed less calories overall. Eating spicy food also provides support for a previous hack, curbing your appetite and allowing you to eat lighter meals.

Uncovered windows in direct sunlight act as open gates for the enemy, warming your room as heat from the sun is absorbed. According to a study by the DOE, including a white plastic lining behind drapes can insulate against heat gains by 33 percent.

Reflective materials can be effective in cooling a room as they deflect the sun’s radiation that would otherwise be absorbed. These films are typically placed on windows facing East and West, as the sun will most directly shine upon these on any given day.

Menthol, an organic compound found in peppermint, triggers receptors in your skin resulting in a cooling sensation within your brain’s thermosensory neurons. A spray bottle with water and peppermint oil is a great hack to stay cool in uncomfortable temperatures.

Aloe vera is widely known for its cooling properties and you may even have bittersweet memories of rubbing aloe gel into your annual vacations accompanying sunburn. Adding aloe vera oil to your peppermint oil spray can provide additional cooling relief. You can even try adding fresh aloe gel to your ice trays to create cooling aloe ice cubes.

Incandescent light bulbs release more than 90 percent of their energy in the form of heat. Energy efficient LEDs are not hot to touch because they do not produce heat in the form of radiation. Switch out the bulbs in your house to cool down and conserve energy.

Although there exists commercially available misting fans, you can combine your spray bottle with peppermint essential oil and fan to mist yourself with the cooling concoction.

When temperatures approach intolerable levels, it can feel as if your body is being broiled and your brain baked. Maintaining your composure in the insufferable heat can push the limits of human patience. The first step is understanding that victory in your biological battle against the heat is obtainable by equipping yourself with the knowledge and skills necessary to defend yourself against a heat wave meltdown.

Whether you live in a climate where heat is a daily reality or limited to the summer months, integrating these hacks into your life will allow you to remain cool, calm and collected. If you do decide to bring out the heavy artillery and use central air conditioning, easily compare electricity providers with ChooseTexasPower.